At the beginning of summer 2014 the war continued to rage in the Eastern part of Ukraine.  Program for Humanitarian Aid, (PHA) found itself forced out of the Donetsk region.  The work that began at the Karlovka orphanage had to be put on hold due to the fighting in the village and the evacuation of the children from that facility.

This unexpected turn of events left us with a difficult choice.  Do we pack our bags and go home?  Do we turn our backs on the work God has so clearly called us to?  Or do we look at our options to relocate?

On July 14th, 2014 Chris and Christy Hill set out on a 7-week ministry and exploration trip to Ukraine.  While they were there they had several objectives but the main objective was to find a place to relocate the transition program for older orphans.  Along with this objective, they wanted to learn from two successful transition programs and help grow God’s Kingdom through ministry and service to orphans and refugees.

On July 15th they landed in Kiev and made a brief tour of the still occupied Maidan Square before settling in for the night.

In Kiev the Hills met up with a team of Christians that were headed to Camp Mayak in Poltava to work and minster to orphans there.  Camp was a wonderful experience filled with Bible lessons, skits, river outings and boiled corn.  The time spent there with the orphan children was both rewarding and insightful.  Lasting relationships were also formed with the American team members as well as the amazing Ukrainian translators that make the sharing of God’s love a reality.

Cherkassy was the next stop on their trip where God provided the opportunity to serve a group of handicapped orphans. Time was spent playing with these sweet children and showing them the love of our Heavenly Father.  Most importantly God’s Word was shared by giving these children Bibles provided by EEM. A wonderful time of worship was also shared with the local church and the Christians who have an ongoing ministry with these precious angels. 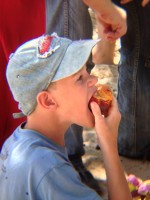 Peaches and other treats were a hit!

One of the stops on this exploration trip was to Zaporizhia.  In Zaporizhia Chris and Christy were greeted by Andrey (our ministry partner) and his family.  Back in the spring, this family left their home in Donetsk to escape the war and moved to Zaporizhia.

Andrey introduced us to several people currently serving older orphans including a teacher at the Orphanage #3.  She told us of a great need there.  She said that out of the 180 children housed at this orphanage only 12 of them are “true orphans”.  The other 168 of them are considered “social orphans”.   A “social orphan” is a child that has been taken out of a home that has been deemed “unsafe” or “unsuitable” by the government’s social services system.   For the children that are labeled as “social orphans” the government does not pay for them to be at the orphanage on the weekends.  The teacher explained that at the end of the school day on Friday these kids must be sent “home” and then Monday morning these kids are outside the orphanage gate waiting to be let back in.  They are hungry, dirty, and have not eaten the entire weekend.  Also, many of them show signs of abuse they received at home or on the streets.  She said something needs to be done to help them. This is when and where we began to see that Zaporizhia was where the transition program was needed the most.

One of the teachers at orphanage #3

The next stop for the Hill’s was a small village outside of Kiev where Jeremiah’s Hope is located. It is traditionally a summer camp for orphans and a safe haven for social orphans. This summer it was being used for housing and serving refugees of the war. Chris and Christy spent the next 6 days serving in this center for refugees.  They cooked, cleaned, played Uno and showed Christ’s love to the refugees there.  This was a great place to serve and learn about this ministry.

The last few weeks of the trip were spent in Zhytomyr.  Last Bell Ministries is located there and they allowed the Hill’s and Andrey and Tanya (Andrey’s daughter and our translator) to learn and serve alongside them in ministry. This is an excellent example of a successful ministry. They have provided help to many older orphans as they transition from the orphanage to adulthood.   A day center, a transition house, and a program for young mothers are just a few of the ways in which they provide help.  While there, the Hill’s fellowshipped with the kids, cooked hamburgers, repaired a tile floor, and even went to a waterpark with the kids.  Chris, Christy, Andrey and Tanya were also able to help a young orphan couple that has come through Last Bell’s transition program by making improvements to their “Legacy Home”.

Fun and work with the older kids

This trip ended with another tour of Maidan Square.  During the 7 weeks spent in Ukraine the square saw many changes.  All of the protesters tents are now gone, the roads are clean and the buildings are repaired. 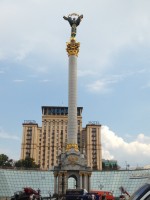 As they boarded their plane home, Chris and Christy knew that God was calling us to Zaporizhia to serve orphans, especially the “social orphans”.